Occasionally a small airplane comes slowly out of the lower left or lower right hand side of the screen and flies towards the top. When hit, it turns into a Yashichi which awards 5,000 points when picked up. 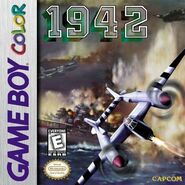