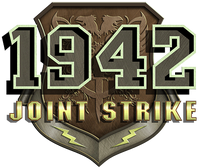 1942: Joint Strike is the sixth game on the 1940 series, released in 2008 by Backbone Entertainment for the Xbox Live Arcade and PlayStation Network download services. Despite the name, it is not related to the original 1942, being an amalgamation of various elements of the series.

This game makes the jump from 2D sprites, using low-budget 3D graphics with a sepia tone style, made to resemble a old movie. The game is only five stages long, the shortest in the series.

Players can choose between three ships: the Lockheed P-38 Lightning, de Havilland Mosquito and Kyushu J7W Shinden, all returning from 19XX: The War Against Destiny and retaining their stats from that game. Also returning from 19XX are the special weapons: the 3 Way, 4 Shot and Laser, which work in the same way as in that game and can all be powered up by picking the same weapon icon again.

This game once again uses the fuel gauge, which works in the same way as in 1944: The Loop Master, as well as a separate bomb stock. This game also sees the return of limited time weapons like in 1943: The Battle of Midway: the Auto and Super Shell, which can be picked in a few portions during the game and temporarily replace the current equipped weapon. Charged attacks are back as well, but this time they have a limited stock which slowly refills by destroying enemies.

The main gameplay addition in this title is the titular Joint Strike, a maneuver which can only be used in multiplayer and replaces the regular charged shots. There are three different Joint Strikes: Shot Link, which shoots a fireball at the other player, Chain Lightning, which casts a lightning bolt, and the Chain Blast, which creates a explosion between the ships.

Retrieved from "https://nineteenforty.fandom.com/wiki/1942:_Joint_Strike?oldid=1196"
Community content is available under CC-BY-SA unless otherwise noted.