Edit
watch 01:36
We're Getting Mutants in the MCU - The Loop
Do you like this video?
Play Sound

1943: The Battle of Midway is the second game in the 1940 Series, and a direct sequel to 1942. It was originally released in 1987 for Arcades and later ported to the Atari ST, ZX Spectrum, Amstrad CPC, Commodore 64 and Amiga. It also received a modified port/remake to the NES which introduces many new elements. On the next year Capcom released a enhanced remake titled 1943 Kai: Midway Kaisen, which remained Japan-exclusive.

The game is set in the Pacific theater of World War II, off the coast of the Midway Atoll. The goal is to attack the Japanese air fleet that bombed the American aircraft carrier, pursue all Japanese air and sea forces, fly through the 16 stages of play, and make their way to the Japanese battleship Yamato and destroy her. 11 of these stages consist of an air-to-sea battle (with a huge battleship or an aircraft carrier as the stage boss), while 5 stages consist of an all-aerial battle against a squadron of Japanese bombers with a mother bomber at the end.

In this game players control the Lockheed P-38 Lightning, which became the series staple ship. Gameplay is similar to the predecessor, with one button for shooting and a second button used for looping or to unleash a powerful screen-clearing attack. This game ditches the lives from the previous game in favor of a ever-decreasing fuel gauge which works as a health meter. When the fuel gauge is depleted, the game is over.

By destroying formations of red ships, a POW icon is dropped, which refills a little of the fuel gauge. By shooting the POW it will cycle between the various weapons available, which can then be picked to equip it to the ship. Special weapons have limited ammunition, but by picking the same weapon again the ammo is refilled. Various items can also be found by shooting specific spots on the scenery, which will grant score bonuses. 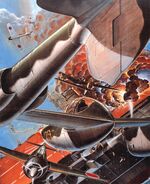 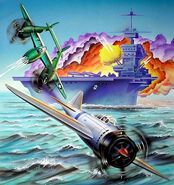