Carrier Air Wing, known as U.S. Navy in Japan, is a shoot 'em up game released in 1990 by Capcom for it's CPS-1 Arcade board. It is a spiritual successor to U.N. Squadron, released in the year prior. It never received any console ports.

The story of the game is different on the Japanese and English versions of the game, though both of them involve the Rabu organization. While the Japanese plot involves a war between two unnamed fictional countries, with Rabu acting as a weapons dealer to one of the sides, the English plot revolves directly around Rabu, which was changed into a middle-eastern country in this version.

In 1997, a local war broke out in various countries triggered by the invasion of Far East J country by X country. According to confidential information from the United States intelligence, a death merchant organization called "Rabu" is behind the war by supplying the latest weapons to X country. The United States, which judged that the supply of weapons had to be cut off in order to stop this war, appointed the Navy nuclear aircraft carrier "Carl Vinson " to take down Rabu.

During the decade of the nineties, many things in the world have changed. Growing cooperation between old rivals and friendships between the superpowers of the globe were examples of such occurring changes in political and economical scenarios of the world, but this fragile peace was not to last for long: in the year 1997, the Middle Eastern country of Rabu built several weapons of mass destruction, such as ICBM's, tactical nuclear bombs, and even a satellite-based tactical laser weapon, able to strike anywhere in the world.

With such weaponry in hand and benefiting from several terrorists over the world, Rabu was ready to declare war on mankind and aspire to their dream of global conquest.

An emergency call arrives to the U.S. government when, in 1999, Rabu strikes Tokyo, Japan with its extensive weaponry. The Americans decide to fight back against Rabu, and the USS Carl Vinson (CVN-70) slips out to sea carrying three of the finest Navy fighter pilots in the world, launching them on a campaign to remove the threat of Rabu and bring peace and freedom back to the world.

The greatest air war in human history is about to begin...

Carrier Air Wing plays much like it's predecessor, with the player choosing between three jet fighters and being able to purchase weapons and power ups between stages. The fuel gauge now works much like in 1943: The Battle of Midway, constantly depleting during the stage, though fuel replenishment items are much more plentiful in this title.

When a dispenser (pod) system sub weapon is fired, it floats around the ship for a while and fires a built-in weapon according to the main shot. If the ammo of the dispenser runs out or the sub weapon button is pressed again, it is injected forward. Dispensers also have the effect of blocking enemy bullets. 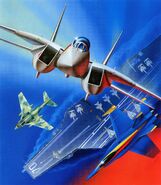 Key Art
Add a photo to this gallery

Retrieved from "https://nineteenforty.fandom.com/wiki/Carrier_Air_Wing?oldid=1117"
Community content is available under CC-BY-SA unless otherwise noted.