The Daihiryu appears during the stages as a large bomber, acting as a mini-boss of sorts. In 1943 it will always come from beneath the clouds, shooting bullets in an arc. After receiving some damage it would develop engine trouble and drop altitude before recovering shortly after, doing this two times before blowing up for good.

When fought as a boss, Daihiryu will appear as a squadron of bombers, much like the ones fought during the stages, but with some with silver tinted windows instead of blue. The squadron will fly from above and behind, so the player must pay attention constantly. Instead of actually shooting at the player, they will instead constantly release "I-Go" radio-guided missiles at the player; these first-generation missiles are launched in salvos of two and essentially remote-controlled miniature aircraft that can still be shot down by the player (although, due to their much-higher speed compared to conventional aircraft, the player is afforded only a relatively small window of opportunity to defend him/herself against them). 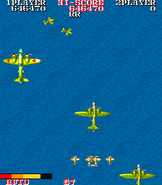 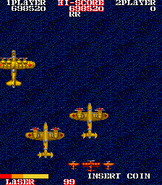 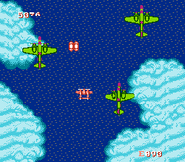 Daihiryu in the NES version 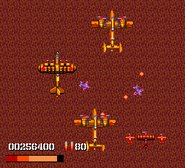 Daihiryu in the PCE version
Community content is available under CC-BY-SA unless otherwise noted.