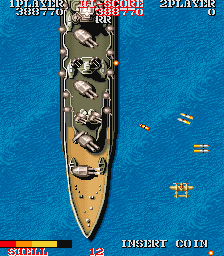 Fuso is the boss of mission 4 in 1943: The Battle of Midway. It is a battleship-class cruiser. It was named Kakushi in the NES version.

Fusō (扶桑, a classical name for Japan) was the lead ship of the two Fusō-class dreadnought battleships built for the Imperial Japanese Navy. Launched in 1914 and commissioned in 1915, she initially patrolled off the coast of China, playing no part in World War I. In 1923, she assisted survivors of the Great Kantō earthquake.

Fusō was modernized in 1930–35 and again in 1937–41, with improvements to her armor and machinery and a rebuilt superstructure in the pagoda mast style. With only 14-inch guns, she was outclassed by other Japanese battleships at the beginning of World War II, and played auxiliary roles for most of the war.

Fuso features a different design from Tone, with various guns lined vertically as well as small guns around the bridge. The larger guns mean a increase in firepower and thus difficulty. 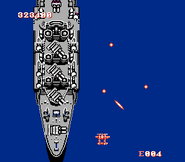 Kakushi in the NES version
Community content is available under CC-BY-SA unless otherwise noted.