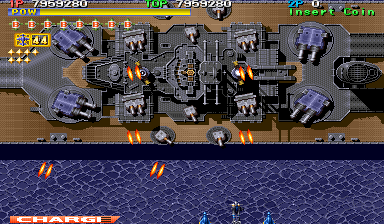 Super Gigantic Battleship "Kaijin" is the boss of mission 10 in 1944: The Loop Master.

True to it's title, Kaijin is a gigantic dreadnought battleship. It will show up shortly after the mission begins, after a very brief dogfighting section. Unlike other battleship bosses in the series, Kaijin is oriented horizontally. The player will first fight against the two frontal three-barreled cannons, and once both are destroyed the boss will move to the left and attack with the cannon on the back. Destroying each cannon gives the player one large Gold. The boss will be constantly helped by Daihiryus as well.

With all cannons taken down, the player will face the ship's bridge, which is equipped with tons of guns and turrets. Destroying the bridge will reveal Kaijin's core, which will sweep the screen with bullets while the two gears at it's sides will shoot at the player.