The Lockheed P-38 Lightning is the main ship on the 1940 series, and in many ways the series mascot, appearing in almost all titles, with the only notable exception being 1943 Kai: Midway Kaisen.

The Lockheed P-38 Lightning was a World War II American propeller-driven fighter aircraft. Developed to a United States Army Air Corps requirement, the P-38 had distinctive twin booms and a single, central nacelle containing the cockpit and armament. Named "fork-tailed devil" (der Gabelschwanz-Teufel) by the Luftwaffe and "two planes, one pilot" (2飛行機、1パイロット, Ni hikōki, ippairotto) by the Japanese, the P-38 was used in a number of roles, including interception, dive bombing, level bombing, ground attack, night fighting, photo reconnaissance, radar and visual pathfinding for bombers, evacuation missions, and extensively as a long-range escort fighter when equipped with drop tanks under its wings.

The P-38 was used most successfully in the Pacific Theater of Operations and the China-Burma-India Theater of Operations as the aircraft of America's top aces, Richard Bong (40 victories), Thomas McGuire (38 victories) and Charles H. MacDonald (36 victories). In the South West Pacific theater, the P-38 was the primary long-range fighter of United States Army Air Forces until the appearance of large numbers of P-51D Mustangs toward the end of the war.

The P-38 ostensibly appears in all main titles, usually as the player 1 ship or as a selectable fighter.

Dubbed "Super Ace", the P-38 sports a lime-green paint job. In most conversions it's color changed to either white or light gray. Notably only the MSX2 port keeps the original colors. The Super Ace can only get equipped with a stronger shot and side fighters, but it can also use the loop-the-loop 3 times on each stage.

The P-38's appearance is mostly similar to the previous game, though the second player controls a red version of the ship. This time the P-38 has more weapons at it's disposal as well as the side fighters. The P-38 also gets a smart bomb which consumes fuel, calling forth a tsunami, lightning or a hurricane to hit all enemies on screen.

This time the P-38 is given a green paint job. The ship is tied to Player 1, while the Player 2 controls the Mosquito, but both of them play the same.

Appearing as one of three selectable fighters, once again the P-38 sports green colors. It is the most balanced fighter, with average stats on speed, power and homing capabilities. The P-38 is best equipped with the Auto Gun, which has a very fast firing rate and causes more damage when it's upgraded, along with the capacity of increased range, beating Shinden's Energy Laser in attack and being surpassed by Mosquito's 5-way Missile.

The P-38 is once again given a visual overhaul, with a light gray paint job with blue stripes on the wings. It is once again tied to Player 1, while Player 2 controls the Zero Fighter, both of them playing identically.

Once again a selectable ship, the P-38 looks similar to it's appearance in 1944, with a blue paint job. It is once again the most balanced fighter. 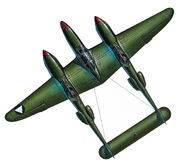 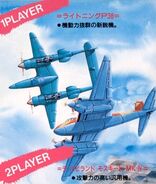 Artwork from 1941 (along with the Mosquito) 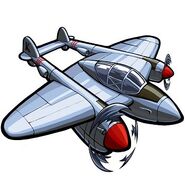 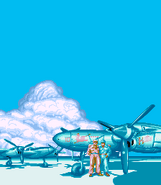