The Mitsubishi A6M Zero is the most recurring enemy in the 1940 series, appearing in all titles.

The Mitsubishi A6M "Zero" is a long-range fighter aircraft, manufactured by Mitsubishi Heavy Industries, and operated by the Imperial Japanese Navy from 1940 to 1945. The A6M was designated as the Mitsubishi Navy Type 0 Carrier Fighter (零式艦上戦闘機 rei-shiki-kanjō-sentōki), or the Mitsubishi A6M Rei-sen. The A6M was usually referred to by its pilots as the "Reisen" (zero fighter), "0" being the last digit of the Imperial year 2600 (1940) when it entered service with the Imperial Navy. The official Allied reporting name was "Zeke", although the use of the name "Zero" was later commonly adopted by the Allies as well.

When it was introduced early in World War II, the Zero was considered the most capable carrier-based fighter in the world, combining excellent maneuverability and very long range. The Imperial Japanese Navy Air Service ("IJNAS") also frequently used the type as a land-based fighter.

In practically all games in the series the Zero appears as the very first enemy the players will face. It is an easily disposable enemy which always comes accompanied by other Zeros. The Zero squadrons always follow predetermined patterns, like flying from the top to the bottom of the screen then looping and flying to the top again. Regular zeros are colored green or gray, while the squadrons carrying items are colored red.

In 1944: The Loop Master, the Zero is promoted to a playable fighter, being always controlled by the player 2 while player 1 controls the traditional Lockheed P-38 Lightning. Since the ships are tied to each player, both of them play identically. 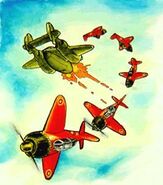 Artwork from 1943: The Battle of Midway
Community content is available under CC-BY-SA unless otherwise noted.