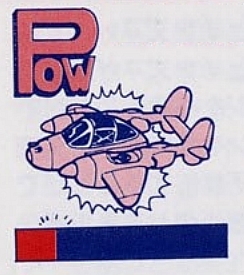 The POW is a recurring item on the 1940 series, also appearing in many other Capcom games. The item is often easily obtained from defeating red fighter formations and restores a little of the player's fuel gauge. On it's original appearance in 1942, it would power up the player's shot by a level. In 1941: Counter Attack, it will restore a single Hit Point when collected.

POW icon in 1944
Add a photo to this gallery
Retrieved from "https://nineteenforty.fandom.com/wiki/POW?oldid=1147"
Community content is available under CC-BY-SA unless otherwise noted.