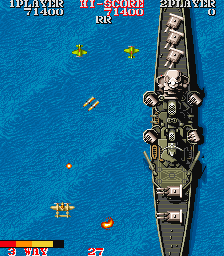 Tone is the first boss in 1943: The Battle of Midway, and the first of the battleships the player will face. Despite acting as a battleship in the game, the real Tone was actually a heavy cruiser. In the NES version of the game, this boss was named Rikaku.

Tone (利根 重巡洋艦 Tone jūjun'yōkan) was the lead ship in the two-vessel Tone class of heavy cruisers in the Imperial Japanese Navy. The ship was named after the Tone River, in the Kantō region of Japan and was completed on 20 November 1938 at Mitsubishi's Nagasaki shipyards. Tone was designed for long-range scouting missions and had a large seaplane capacity. She was extensively employed during World War II usually providing scouting services to their aircraft carrier task forces. She almost always operated in this capacity in conjunction with her sister ship Chikuma.

Being the very first boss, Tone is just a taste of what's to come. It has a few guns lined vertically on it's hull and four smaller guns on the bridge, but it fires at a slow rate, making it easy to take it down. 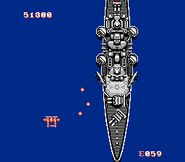 Rikaku in the NES version
Community content is available under CC-BY-SA unless otherwise noted.