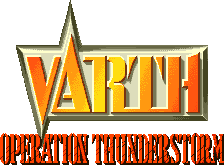 Varth: Operation Thunderstorm is a shoot 'em up game released by Capcom in 1992 for it's CPS-1 Arcade board. It never received any console ports, but was later included in the Capcom Classics Collection.

In the year 2667, the mother computer Delta-7, which controlled all mechanized systems in the planet Varth, got possessed by a mysterious space entity called DUO. It turned against it's human makers and began a genocidal war, commanding it's mechanical troops to exterminate all human beings. The planet was plunged into violence overnight and many died in that first 24 hours. A small group of survivors managed to repair two old style fighters, so primitive that they still required human pilots and were not under the influence of Delta-7. These two fighters represent the last hope for man to prevail against the behemoth he has created... and you have been chose as the pilot.

Varth's gameplay draws very heavily from 1942 and other games in the 1940 series. The goal is to destroy enemy units while avoiding being hit, and reach the end of the level, occasionally ending with a boss fight. One hit from an enemy will cause the player to lose a plane, and at a lengthy 30 levels Varth makes for quite a challenge. The biggest difference between Varth and other games in the genre of its time is the inclusion of items called "Pods". When a player picks up a pod item, a pair of pods will follow the player and carry weaponry of their own to supplement their artillery. Additionally, pods can completely block most (but not all) forms of attacks from enemies, rendering the player almost invulnerable to attack from any direction in which the pods are situated. Players can choose from two formations for their pods - fixed or smart. In fixed mode, both pods remain directly in front of the player to render the planes invulnerable from the front, but leave them open on the sides and from behind. In the smart position the pods will remain separate from each other at a 180-degree angle, and move about according to the direction of incoming fire. If enemy fire manages to slip between the pods before they can react (potentially common in later levels as large numbers of enemies appear on screen), the player is left vulnerable and only has the option of moving in hopes of avoiding a hit.

Varth features three different weapons for the player - a laser (long rate of sustained fire but lowest horizontal range), a shotgun (relatively powerful with a potential range as wide as the player's craft), and multi-directional shot (very wide range but lowest sustained rate of fire). Additionally, three different types of pod weapons are available - homing missiles (weakest weapon but with a useful homing advantage), missiles (more damaging than homing missiles but can only fire forward), and napalm (powerful but with very low range). Like 1940 games, Varth also features bombs which allow the planes to perform "mega crashes". The type of mega crash a plane can do is determined by the weapon it is carrying. Lasers will result in an electricity attack that will cover the entire screen. The shotgun will fire missiles which will move from target to target. The multi-directional shot will fire a single large burst that moves directly forward from the player, then emanates many smaller bolts on reaching the top of the screen.

The game also features several items which can help the player in other ways, such as point-yielding icons, items which will increase the power of your arsenal, additionally bombs, and items that will destroy all enemies on a screen. Perhaps the most useful item is the Yashichi, which will instantly upgrade a player's weaponry to its highest level.

There are many parallels to 1942 and its sequels in the game. The three main weapons featured in the game, as well as the presence of a mega crash, originate with 1943. Additionally, the presence of five red aircraft which follow each other in a formation and will drop power-ups when destroyed, as featured in Varth, is a staple of the 1940 series. 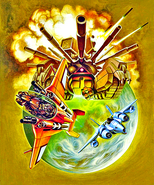 Key Art
Add a photo to this gallery

Retrieved from "https://nineteenforty.fandom.com/wiki/Varth:_Operation_Thunderstorm?oldid=1260"
Community content is available under CC-BY-SA unless otherwise noted.